Art and Culture of Balangir

Balangir in Odisha has rich culture that dates to ancient times. Kosli or Sambalpuri is the langauge that is widely spoken in western Odisha districts that existed along with Sanskrit from Prakrit age. Some of its folk dances have been recognized over the last couple of decades and is observed as the oldest form of folk entertainment in India. Danda Yatra and Danda Nata are the popular form of folk dances. Dangadda, Ghumra, Sadhana, Sabar, and many are dances that vary in rhythm and lyrics. It's a delight to eyes and ears to see tribes singing the songs of these dance forms while doing daily chores like farming, grazing cattle, driving bullock cart or rowing a boat. 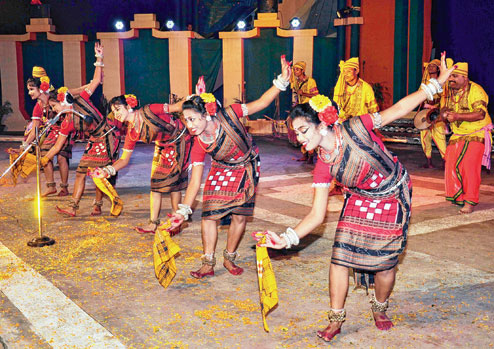 Percussion instruments are very popular amongst people from this region. Dhol, Mandal, Nishan, and Tasha are the oldest and unmodified instruments. Nishan is usually carried and played while dancing for a folk song. Apart from these, Dhulak, Mridanga, Pakhoj, Dugitabla, Mardal, and Bansi are few of the other instruments that are often played during a folk song or dance occasion across the state. Rangabati was the song composed in mid 1970s that became internationally popular. Chhiollai, Dauligit, and Humobauli are sung by children while Rasarkeli, Jaiphul, Bayamana are famously crooned by youth.

Sambalpuri saree is well-known across India for its handloom fabric excellence. Panchavati, Sonepuri, Saptaapar, and Paradaa are other variety of sarees named after their place of origin and commonly known as Paata. The unique quality of Sambalpuri saree is that they are weaved with Baandha (tie and dye) and fast colors. These colors brighten after long use and wash over the years. Some Tussar sarees are also painted with depictions of Raslila, Mathura Vijay, and Ayodhya Vijay.Traditional costume of Kosli women are spoken highly because of the variety ornaments that are appealing to onlookers. Tribal women wear sarees that are thick, wide and short called as Kapta. They are fond of flowers Kaya phool and Janyiphool that decorate their plait with Panpatri or Belkhadi. It is a kind of clip that holds these flower buds. Beautiful ornaments that embrace Kosli women are Khagla, a silver necklace. Jhalka, Bentala are worn in upper ear, Gathia in earlobe, and Karna phoola-Shikla on the ear. Katria and Bandria are worn on their hands. Jhuntia is worn on toes, Paye-jhol around ankles, Ghunsi around waist complete the list. The tribal women are also known to get permanent tattoos of God or Goddess names on forearm or back of their palms.

In addition to song and dance, the tribal villagers also entertained themselves with wide range of indoor and outdoor games, most of which have faded by now. Chhaka is an indoor game that is still popular with residents of Balangir. It is played with six pieces of large sized shell and 16 color wooden dots. It is carried by new brides to husband's house as a tradition after marriage art.Clay construction is a major bread winner for tribes in this region. This form of art work is called Terracotta, a traditional Kosli art.

The marriage of Lord Shiva and Goddess Parvati is celebrated as Sital Sasthi, a festival in June. It is a weeklong festivity that is participated by devotees from neighboring states. Nuakhai is one of the important festival across western Odisha and not just Balangir district. The preparations for this festival begins a fortnight early that includes cleaning house from dust, washing all unused utensils. This one is similar to Baisakhi of Punjab and Haryana, Sankranthi of South where the first crop is offered to almighty. Eldest member of the family distributes first grains to rest of the family.

It is festival where people from all respects of life gather and make it a grand community event. Similar to Rakhi that is celebrated across India wishing well being of brothers by sisters of the family, Bhaijuntia is celebrated by women of Balangir district in same respect. All women keep fast round the clock to seek blessings of Durga. This festival falls on eight day (Maha-ashtami) of Navratri during Durga puja.

Comments / Discussion Board - Art and Culture of Balangir