Balangir located in the western part of Odisha is both city and municipality, and is also addressed as Bolangir by locals. The city is known as the cultural hub of Western Odisha and also the third largest city after Rourkela and Sambalpur. Balangir has a rich cultural heritage and the folk artists of the city are trying hard to preserve the famous Kosali folk arts and dance. Balangir is also hub for the Ordinance Factory that is run by the Board Ministry of Defence, Government of India. This factory is responsible to manufacture many products that are used by the Indian Armed Forces. 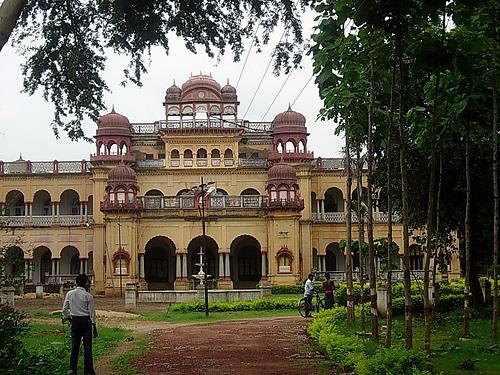 Balaramgarh was original name of Balangir and the capital town of kingdom of Raja Balaram Deo in Patnagarh. The villagers state that the name was derived from the Balaramgarh fort built by the king. It is learnt that Balaramgarh was a small village and existed from 16th century. Balangir also has history of extremist rule by Ramai Deo who dominated the surrounding 18 villages too. The villages were then called garhs which later formed as his kingdom. This saw the rise of Chauhan rule and attained monarchy. The village was an unhealthy locality with mosquitoes breeding in bamboo bushes and many villagers suffered from malaria disease. Hence, Raja Ram Chandra Deo III brought up the proposal of moving Balaramgarh out of Patanagarh and build a separate town. Also, the connecting roads from nearby villages were not routed It is then that the village got an uplift as town with the layout plan by Pandit Chintamani Bidyabhusan. The plan was submitted to Deputy Commissioner of Sambalpur, who sanctioned it and moved it new town of Balangir from Patnagarh in 1872. The shift in location to Balangir was good in terms of climate and adjacent villages were conveniently accessible. The old locality of Balaramgarh is now called Junha Dihi that means old house site.

The Chauhan rule ended after British took over and implemented system of Diwani. Patna and Sonepur states merged in to Odisha state formed on 1 January, 1948. It was evident that Chauhan rule had completely ended. However, King Rajendra Naryan Singh Deo was the ruler before and after Independence, who made major inroads in to politics successfully. He served as Chief Minister of Odisha from 1967 to 1971. The Balangir district was formed on 1 November, 1949. During his administration, the district was beautified with parks and construction of several functional buildings- as fine structures.


Geography and Climate of Balangir

Balangir is lsucky to be bordered by places of scenic and epic fame. The district’s north-west region has Gandhamardhan hills that is Ramayana fame. North-east border is a capture of scenic beauty with Mahanadi hills crossed by many streams and inhabited by Bison and Sambar. This region is also sprinkled with dense forests, that stretches through Nuapada, Kalahandi districts, growing parallel to the Gandhamardhan range in the east.The district is flanked by many main rivers and tributaries of the country, such as Mahanadi, Tel, Ang, Jira, and Saleshing. Tributaries of the Tel river are: Undar, Lanth, Sungadh, and Sukhtel. 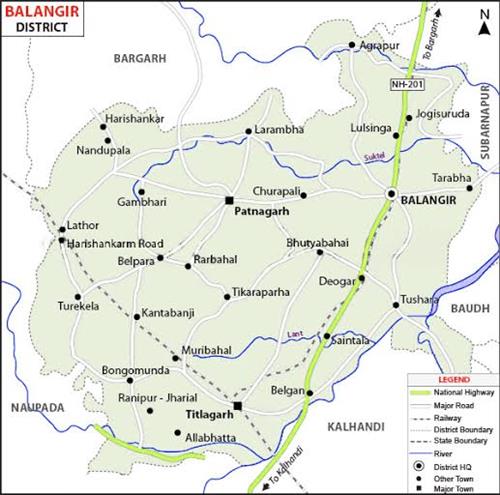 Map of Balangir
Surrounded by hilly regions and streams – Balangir is but obvious to have a beautiful mix of climates, making it a beautiful place of visit. There are soaring temperatures in Summer ranging between 32°C to 48°C. January to March is a pleasant time to visit and enjoy the places in and around the district. Although, the city does not experience much rain these days, you can always enjoy the small showers during the months of June and July.


Art and Culture of Balangir

Age-old rituals and traditions have kept the art and culture intact of Balangir district, a popular community of western Odisha. The traditional attire of Kosli women and their ornaments add up to the rich culture of the region. As a tradition, tattoos in the form of God or Goddess names are marked on body. Folk dances and songs are popular for all occasions, songs are composed in Kosli language. These are played using variety of percussion and other instruments. Craft work with clay is main stay of art among tribe villagers, and is called Terracotta. Sambalpuri and painted Tussar sarees are well-liked from this region. Though games are part of entertainment, there is culture attached with it. Most of the ancient indoor games are extinct with Chhaka still played. New bride takes this along to husband's house after marriage. Natural beauty like Kayaphool and Janyiphool flowers are favored by tribal women and treat them as part of their culture.

Lord Shiva and Durga are worshipped mostly across the region. Most of the festivals are also connected to these deities. Women keep fast round the clock to seek blessings of Durga for well-being of brothers during Navratri. In the same lines, they worship lord Shiva to bestow good health and life on her children. Long duration festivities like Sital Sasthi and Naukahi mark week long celebrations with people thronging in lakhs to offer their prayers and be a part of these occasions. While Sital Sashti is a festival of June, Naukahi falls during August and September. Naukahi has a special importance as the first crop of season is offered to God. Festivals celebrated by other religions across India are celebrated here with equal importance and enthusiasm. Marriage of lord Shiva and goddess Parvati is observed Sital Sasthi. Naukahi is celebrated on Maha-ashtami on Navratri. Shiv Ratri Mela and Shrabana Purnima are other festivals that also draw huge number of devotees from states like Bihar and Jharkhand. For More Click Here

Places to Visit in Balangir

Balangir is certainly a must visit place for people touring Odisha. It has rich heritage from the past for being ex-capital of ancient Patna. Below is list that can be a part of must visit places in Balangir:

Patnagarh - The monuments and temples date to 12th century and reflect Chalukyan style. The temples here were built under Chauhan rule.

Saintala - It is known for Chandi temple and all incarnations of Lord Vishnu were some great pieces of sculptures unearthed here.

Turekela - Adventurous place of liking for tourists is Turekela that has thick jungles. Wildlife beauty is spotted here that includes tigers, bears, and deer varieties.

Harishankar - Nature is at its best with a tributary of river Tel from a height between hills. The temple of Harishankar is located here with worshippers offering prayers to LordShiva and Bishnu (Vishnu). 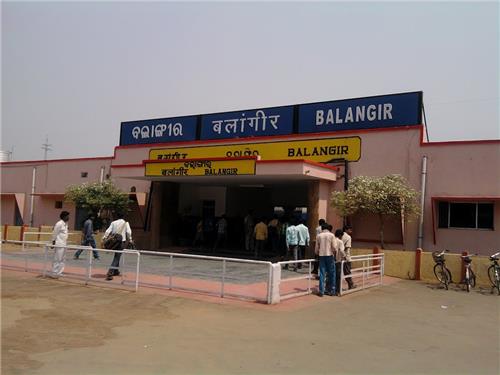 The public transit of Balangir city was well planned and accordingly structured decades back. The Maharaja of Balangir laid bus transit system that eased the commute of the localities to a larger extent. The transit not only joined all the cities of the district, but also the place is well connected with Patna and other eastern villages. Apart from this, the city is well connected through two National Highway routes. National Highway-57 is stretched from Malmanda to Dumerbahal, Bairasal to Khari and NH-26, stretches from Balangir to Loisingha. The Government recently announced few clusters of transport that are recently developed to stay together other parts of the district, one of this is the Balangir-Patnagarh road transit. There are around 35 buses that connects you to the city. If you are planning a trip toward eastern part of India, then there are chances that the train might halt at Balangir station. The city has good number of trains to go from the city to other parts of Odisha or the country.

Quarter of the district is covered by forest range, with most of the population being tribes. The forest products are considered as major chunk of the economy of Balangir, and these products consists of timber, firewood, mahua flowers, and kendu leaves. Kendu leaves are the best produce of Balangir, and is quite famous for this. People of the district, make their livelihood by selling products like Sal, Piasal, Teak, Sahaj, Dharua, Bamboo, and other woods. With many streams interspersing the city, the lands around are fertile, making agriculture possibly the best occupation, and this is being encouraged by the government too. The land also encompasses minerals wealth like graphite, lead ore, manganese ore, and the costliest of all bauxite is also found here. Some part of the population is involved in the quarrying of these minerals. Although the people of Balangir are engaged in both farming and non-farming activities, the per capita income is less, and hence the district is being supported through Regional Center for Development Corporation, Government schemes, and funds.


Balangir at a glance

Comments / Discussion Board - About Balangir